What would you pay to reverse aging and achieve perfect health? Louis hid the secret on Nevis Island. 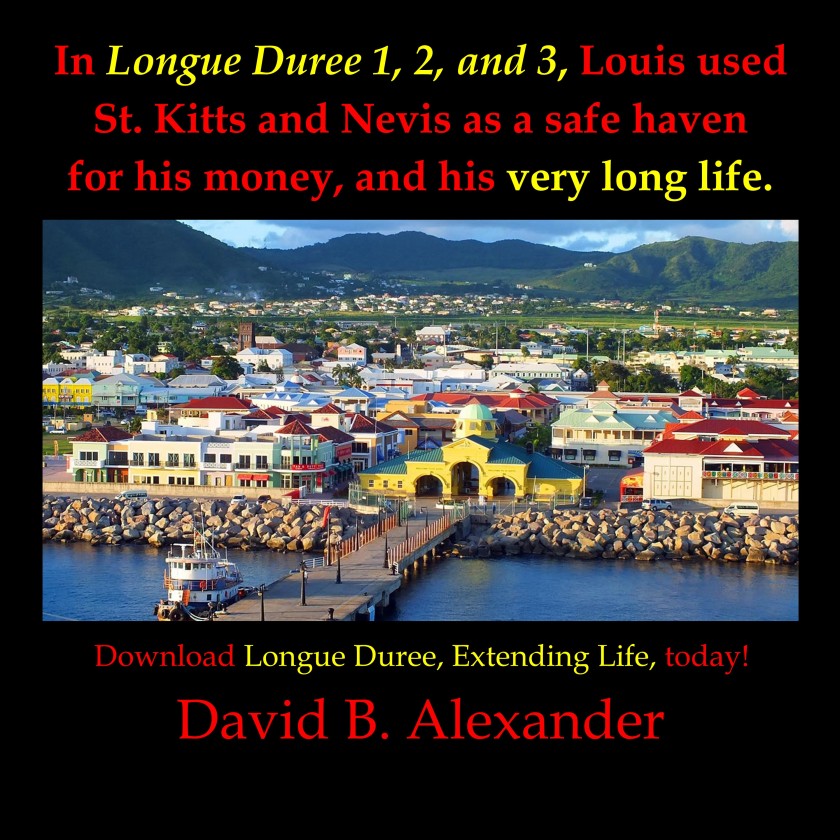 Real life research for book one.

Basseterre, St. Kitts, was quiet first thing in the morning. It was humid, 85 deg. and we stopped at an open air bar for a cold soda. The shops displayed all of the same tourist products that you see all through the Caribbean, and at 10am we were still walking with empty hands.

A few minutes later, the gates were opened for the cruise ships and the cattle hit the grazing grounds. We waddled through the lines of the shops and heard similar sales pitches in each one.

I am a sailor, with my own boat. I usually avoid tourist areas and drop my anchor away from the cruise ships.

Here, the economy survives on tourism. Four Seasons Resort employs 10,000 of the Kittitians. I like to find the islands that have not been corrupted by the desire for wealth. I’ve lived on other islands only to watch cable TV, and tourism, turn a peaceful society into roving gangs and drug dealers. It is still years out for St. Kitts, but they are on that path. The outside force… and big dollar investors, are already here.

Newcastle pottery in the mountains of Nevis, has a woman that forms all of her creations from Nevis clay. When she is satisfied with her work, it is fired behind the building in coconut husks. I bought the piece below for $18.00 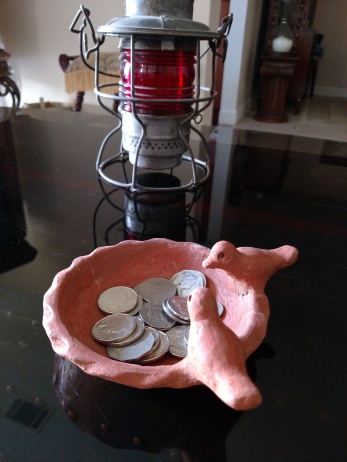 When I lived in St. Croix, I usually had my breakfast on the boardwalk in Christiansted. It was an open air restaurant and I poured some water into a bowl, dissolved a few packets of sugar in it, and the banana birds came from all directions. One time, I had eight birds fluttering around the sugar water. This piece reminded me of that. In the picture, it is on my coffee table in Florida with the left-over EC coins in it.

I buy coffee cups everywhere I go. What can I say?

Below, I am at the stern of the ferry, with St. Kitts in the background.

At last, I am walking up the dock toward town. Good vibes here.

The main purpose of this vacation was to get a break from the fifty-six hour weeks I’m working now. I build cabinetry for 70′ yacht interiors. Each night when I return to my home, I add about 4 hrs a night for my writing, and advertising. (Such as this).

The strangest thing about this vacation was that Nevis / St. Kitts, were the safe havens for the main character in my next three books. As Louis refined a chemical that embellished and extended his life, he became prosecuted by the elite wealthy, politicians, and pharmaceutical companies. He became wealthy and the demand exceeded the supply. Through his prolonged life, and several wives, he escaped to a home in Nevis, in all three books. Nevis is a sovereign country and a safe haven for wealth. I had never been there and had done all my research on the internet.

In my books, Louis played chess with an old island man in the square by the police station. The old man, named Charles, had never been beat. I went up to a security guard at a bank and described my fictional park. He pointed up the road and told me where to find the police station, and the little park. I told him about the book. He said there was a man that played chess and checkers there, and is never beat… but his name is not Charles.

It was so strange to be walking through the pages of my books. They are all three finished. Longue Duree I, Extended Life, is on Amazon now. Book II is back from the editor, and I am making suggested changes. Book III is with the editor now. “She has been very quiet.”

Writer David Alexander’s life has had as many twists and plot changes as his books. College in Cincinnati for commercial art was sidelined for the construction industry. His writing started there, as therapy for the stress of owning a business. David learned to sail, and vacationed on a sailboat in the Caribbean, every December. He fell in love with St. Croix and shut down the Ohio business permanently. Moving 2200 miles, he built and ran condominiums in St. Croix, USVI. Now, living on the east coast of Florida, David builds interiors for 70’ luxury yachts. The years of stories in the marinas, and experiences in many countries, fuel the keyboard of this lucky writer. He has done with little effort what many hope to experience on their bucket list. View all posts by David Alexander